Endive has a pretty strong flavor. If you are not a big fan, this recipe just might get you to start enjoying it. You do still have the taste of endive, but it is lessened slightly by the butter, lemon, breadcrumbs and parmesan cheese. This “baked” version is an extension of the French classic endives meunière where you do not add any crumb topping to the endive.

Bring a pot of water to a boil and add half of the lemon juice. Using a paring knife, make a small cross in the bottom of each head of endive. Remove any bruised or dirty outer leaves. Add the whole endive to the boiling water and reduce the heat to a simmer.  Simmer until the endive are softened on the outside but still firm in the middle, about 5-8 minutes depending on their size. If your endive are on the smaller side, check after 5 minutes. Once cooked, transfer the endive using tongs to a paper towel-lined plate to drain.

While the endive are cooking, mix together the breadcrumbs, cheese, parsley, salt and pepper in a small bowl and set aside.

Slice each endive in half lengthwise. Turn on your broiler to medium high heat.

In a large oven proof skillet, heat the butter over medium heat, swirling the pan occasionally, until it is noisette (a light brown/caramel color). Keep an eye on the butter as it can go from brown to black in just a few seconds and then your butter will be burned and unusable. To the browned butter, add the halved endives cut side down and the rest of the lemon juice. Cook for 1-2 minutes and then turn the endive over carefully being sure to keep it in one piece. Sprinkle the breadcrumb mixture on top of each endive and spoon some of the butter in the pan over the crumb topping. Transfer the skillet to the oven and broil until the crumb mixture is golden. Serve immediately. 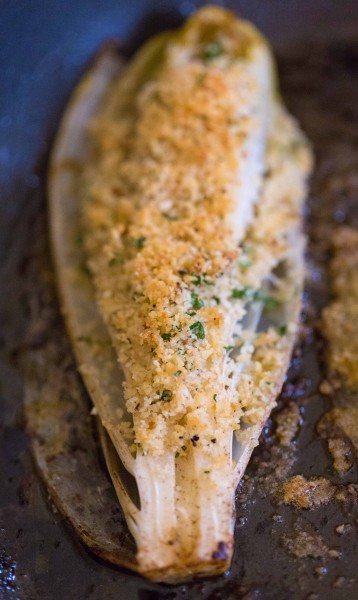